Issue Summary:
Players most commonly report seeing an increase in lag on their home islands and on more established saves. Lag has also been reported when traveling from island to island, especially as the island the player is approaching begins to load in.

Workarounds:
One of the common factors in saves where players report this occurring is a significant amount of gathered resources on the home island. Reducing the number of loose items may help towards a reduction in lag.

Most common reported items that when cleared up have helped players are: Sticks, stones and fiberous leaves. Please note however that the amount a player has on their island in comparison to other items may be a factor in this.

Players have recently reported noticing that red containers may be impacting lag buildup. This may appear in the form of the red container duplication glitch that spawns multiple containers in the one spot, or the use of a lot of red container parts in building on an island. If this is the case on your island, please try swapping these parts for other materials such as planks or sticks.

Similar to the above potential trigger, there is an issue can may result in plants in planters duplicating. While not a commonly reported as a potential trigger for lag like the red containers, if a save is established enough there may be a significant overlap of planters on an island.

Further Reporting
If you find the lag when traveling occurs when traveling only to a particular type of island or around a specific object, please let us know in the comments below.

If you find lag or performance drops are occurring for you and your situation does not match those listed above, please create a new post in the main Bug Reports section.

If you have noticed a lag increase after using a specific material, please let us know

So i started this new save with animals on “passive”, never had a lag problem or anything. Now Its sounding like I’m in a tunnel again since I turned animals to “default”. I did notice a slight lag or pause when going back to my main island, but technically I’ve only been to
3 islands on the whole map (home, main, and resource). Seed #25024114, I’m on ps4

Ty for all you do. We have recently noticed a lag in our the bigger our home base got and we could only restart another; did not mind though just try to do better next time. That character was over 250 days old.

Thank you for your understand FIELDSislanders - please do let us know if you notice anything in particular triggering a lag build up for your in your new save.

From what I can tell so far once we start to build on an island and get a few supplies up even on the new on it starts to lag during the save. Thank you so much we really love the game. Cant wait to see what’s next. Also, quick question? is there anything on the ship the Megalodon is eating at? We are using a PlayStation 4. We did uy full game.

Thank you for that infor FIELDSislanders - A common items players (including myself) gather first is sticks and leaves for fire and the water still, If you have any piles like that early on, try seperating them out to see if that helps at all.

I can confirm there is no loot or crates on the piece of ship in the Megalodon area. Only the Megalodon drops items when defeated.

I know I know. I’m a late player.
But what i’ve found is.
Like everyone here.
I’ve put all my stuff on that island (to become a base). On the course of maybe 8-10 in games days and it started laging. I’ve looted everything on it on the first 1 or 2 in days. So the growback process could activate for Yukka, Palm sapling, Giant Crab Hogs etc…

On That Island. It Has The Big Rocky Formation in the middle with Egg nest everywhere. Some wreckship and the 1 big wreckship with the Crane and 2 Red Container on it. You know the damn containers that Duplicate themselves.
On wreckship they duplicate. On the beach they don’t… They grownback like Yukka Tree. that is a non sense. Since it is a Material made by man and non natural.

And THAT’S I think is the cause of the big lag and crash.

I’ve done it. I’ve taken all my stuff. With Saving each 2-3 minutes with save that did work in the process. Other that did crash the game.
Pickinp up Stuff without crashing and crashing the game.
11 real time hours to clean the island.
I’ve put everything on an island that don’t have a Big wreckship or Red container.
Result ? No lag there.
And I’m there on that new Island for 18 in games days now

I’ve never touch any Red container of the entire 96 in-game Days I’ve played of Container Duplicating. Except for 1 on the 2nd island i’ve visited. I opened it to see if there was something inside.

So if the duplication or growback non sense process of a container is at maybe 3 in game days like Potato or Yukka tree etc… Do the math. Theres maybe more than 25 Red Container inside one another… Time 2 since there’s 2 red container on the Big wreckship. I’ve visited that island maybe in my 15-20th days of playing my story. Since its the island east to the Starting island.

I’ve return 2-3 times since i’ve left that island. still lag but less than when I’ve had everything. Except when I’m in the water. That was the Kicker… Why it is still so laggy near that island.
I’ve Pass next to that big shipwreck and it click… These MTF Containers dupe… So making more & more item in the same zone.
I go to one of them and Open the door 12th time and there was stil a door close… I’Ve stop counting.
Taken the Refined Axe out. Smash 2 time on the close door. The Hit circle pass for 100 to 50 back to 100… Almost freeze for 5 second then came back…
I’ve hit the OPEN DOORS. since there’s 12 open. until one drop and nope Stuck in and out of the container. Big lag building up. Hit more shot another one drop and KABOOM game crash…

So what I think is. If you Fix the RED Container duplication… That one part of the Big Lag source problem gone.

Player Starting feeling lag. Will never start building housing etc… They don’t want the freeze, lag and crash of the game. We don’t need an unlimited red container source too…

I encountered the same issue with a particular island with the red container pieces. I removed that island and unfortunately the lag still persists. I’m on day 430 and what I can tell u is that, you want to settle on multiple islands and split up the amount of supplies between them. If you are planning large structures my advice for u is to create your own island/islands with minimal items on it. Load them into your world(remove wanted items from island being replaced prior). Only take the supplies needed for building to the island. The bigger u go it will slowly make your island laggy. Unfortunately it’s just a workaround atm. It takes alot of work to fix stuff sometimes and I know they will get us soon. Just be patient and try my work around. Cheers

The purpose of the post 1st was too let them know that the Container are problematic. Since they dupe they cause lag. Normally you should Scrap one Consisting of what? 1 door, 3 walls on each side and the back ok it… Maybe i’m wrong in the number of part it give since i’ve never destroy one completely. But the fact is still… 7 parts or maybe 5 parts. Duplicating by itself say each 3 days… After 80 in game days… Its a lot of item. Its not like Palm Tree that once chop down. They are gone forever. since they Dupe in the zone. It’s making loot that you didn’t loot or want. Causing memory problem. Its like when you pile up too much plank or stick etc… the pile bug and move constantly.
A Container should be a one scavenge journey after that the frame could dissapear.

So From one island with the 2 container on the shipwreck too one without it. No lag. But I knew at that new island. If I wanted too stay away from lag. I needed too split things. I’ve Already place my stuff by group on 5 different island.

And sure enough I don’t understand what you mean by Removing an Island. I’ve start the game. I know they’re 25 Island or zone on the map. How can i Remove an island. By going custom ?. I want to play story mode. not Custom mode.

The Story should be lock off that kind of stuff personally I say.

I’ve actually had to quit stranded deep recently because of lag. Since I’m a hoarder, my base island got to the point of being more of a slide show. Sticks and rocks only stack in 4. I had roughly 120 of each on my main island. If i were to clean that up via crates, that’s 10 a piece. This becomes tedious to do with no way of crafting crates. And that’s just rocks and sticks. Fiberous leaves, palm leaves, and logs all have contributed to the lag. I started using neighboring islands to store more items.The more established your base, the worse it gets. Until we get the update pc got a few months back, Stranded Deep will be unplayable for me.

Hi MGS_No406TaLk - welcome to the forums,

Thank you for describing your original island lay our in detail as well as your experiences there and on other islands. The team are aware of the issue with the red containers (we have a Known Issues report about it here: [Known Issue] - Multiple doors and sides on containers ) but they normally are mentioned in lag when used as construction material. I shall pass the details of your experience of the whole containers onto the team.

Please also note that the same issue that causes containers to multiply can also cause plants to duplicate too, so if you have a large number of planters on your island the lag there might build up too - This isn’t confirmed as it hasn’t been reported except for when players harvest a lot from the plants.

I experience lag after lots of structural builds or lots of supplies. It doesn’t matter what it is it seems as long as there are large amounts of anything on an island it causes lag. It gets to the point were it lags on nearby islands also. 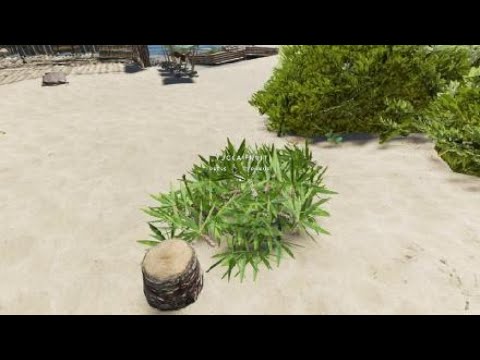 I have an idea that might also cause lag. I added a video as well just to help give a better description. But anyways the yucca plants give yucca fruits after you take off the leaves and when you don’t remove the fruits from the plant it can make the game laggy. I haven’t tested it but figured someone else might actually want to and post results. But anyways that’s all I got for it. I know this isn’t really related to red containers duping but I figured it still might help with the lag part

Thanks for sharing this video @TheMonster14544 - I think I’ll seperate report for this for the team so they can investigate it and determine if it’s related to other lag issues or if it’s an independant source. Either way this is super useful! Thank you again