I cannot get the “two of each” trophy to unlock with the new update.

I have tried sailing into a storm with 2 snakes, 2 hogs, 2 boars, 2 giant crabs and 2 small crabs which isn’t fun because as you can imagine the raft is half sinking lol. I assume with the recent update that the giant crabs and giant hogs are required since they’re also land animals? I tried testing on a new world without the giant tier of animals and it didn’t work either. I have also tried with seagulls and bats in my inventory. I will keep testing but I would also like to know the requirements that need to be met for this to unlock. Which animals are required? Also, do the animals need to be on the raft such specifically the small crabs since they can also be placed in my inventory?

I have reloaded my saves and restarted the console as part of my troubleshooting process.

If i recall correctly you need 2 boars, 2 snakes and 2 crabs on the raft itself for the achievement.

I dont believe you need the hogs and giant crabs too after the update, I’ll send a message to the team to double check but I likely wont get a response right away.

Let me known if you do try the 2 boars, 2 snakes and 2 crabs on the raft sailing into a storm. I do remember players saying they kept their crabs in their inventory until they set sail to avoid them sliding off or getting lost, but they do need to be on the raft itself.

Thank you! I will continue to attempt this!

Okay, didn’t get a response from the team yet, but did find something that could help.

Try - sailing into a storm, on a raft, and close to you (As in, not a large raft with them on the opposite end to you) have 2 hogs, 2 boars, 2 night snakes and 2 crabs. It may pop with crabs in your inventory but you can drop them on the raft to be sure. Anchor your self at your island so you’re ready to go and as soon as the rain starts, start sailing away from your island into the storm. This should, hopefully, trigger the achievement without having to get too far from the island.

I’ll still check with the team as soon as I can, but hopefully that should help

Here is my most recent example! I will try a smaller raft like you suggested and will get back to you! I’m a little concerned because with all of those animals it is gonna sink bad lol.

Sailing starts around the 2 minute mark: 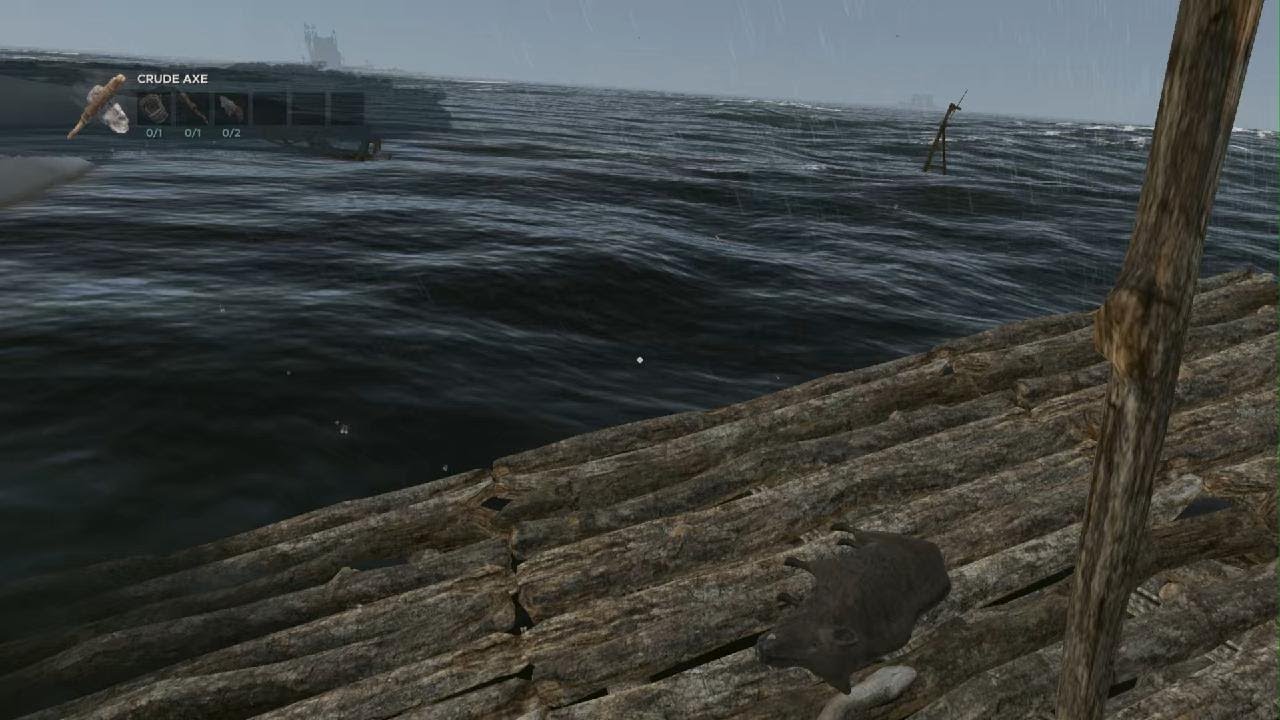 I tried it with a much smaller raft, a 1x3 but it still didn’t unlock. I will keep testing.

I tried more with your suggestions but it’s still not unlocking for me. I even deleted everything and I reinstalled the game. This is the only thing that stands in the way of my platinum trophy

Thank you for updating me on your progress. I checked with the team and they can confirm it is:

2 Hogs
2 Boars
2 Snakes
2 Crabs
Close to you on a raft, and sailed into a storm.

Because a number of issues appear to be occurring in updates saves. I am wondering if you are playing an updated save, because the Hogs are now needed, if that could be blocking it… Is this a save you transferred over or did you start a new one?

Ok thank you for the update! Originally I was on an old save that transferred over but my most recent attempts have been on a brand new save. I will keep at it and will update you with my progress.

Thank you for confirming NLGpro, I’ll update the team too. And of course if they have any suggestions other suggestions I’ll send them your way.

It finally worked BUT not during a storm. I was planning to go to another island to continue to expand my raft and it popped during normal weather. See the video below. 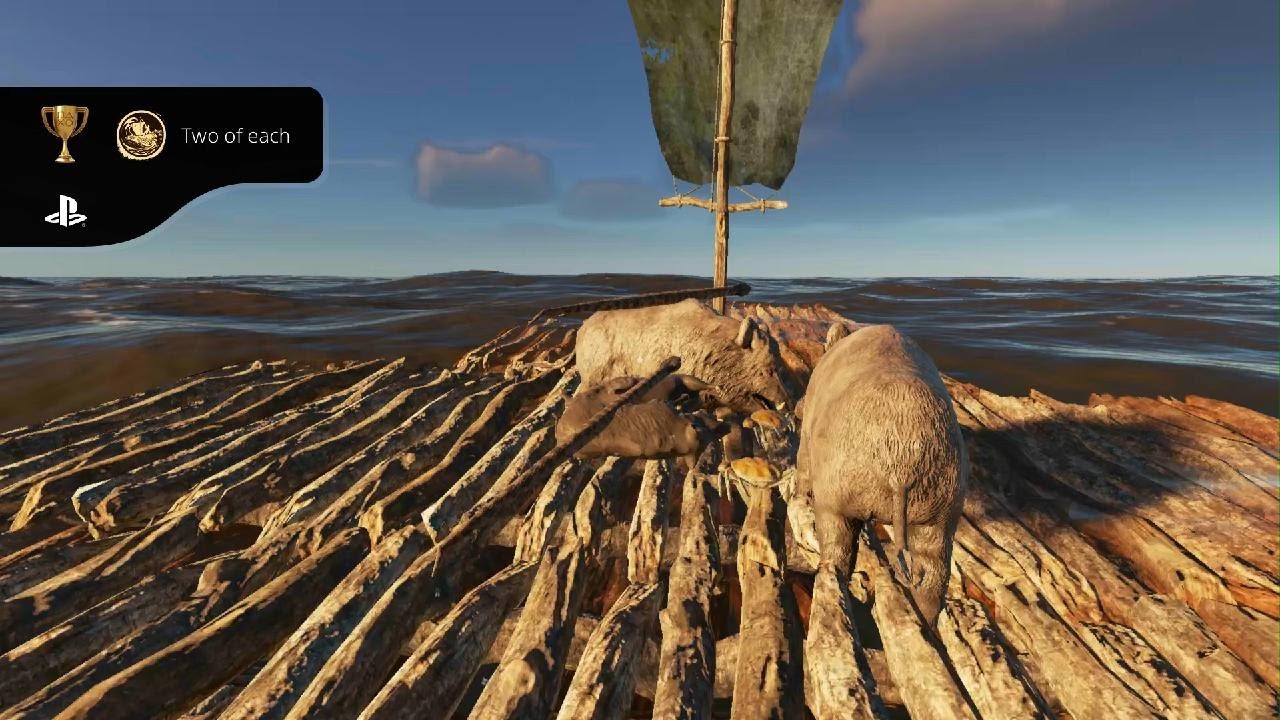 But sailing without being in a storm isn’t right. Will let the team know so they can continue investigating. Thank you for keeping me updated with your attempts NLGpro, it’s super helpful!

Hi
I am having trouble with this achievement as well. I have crafted 4x4 raft since anything smaller, and my raft starts sinking.
The hogs / wild boars are way too heavy for a smaller raft.
So I tried it during normal weather and storm and I have tried multiple times and is getting very very frustrating.
Please help as this is the only other trophy I need.
Thanks in advance.
Adrian

Hi adriandz271 - please see the message I sent in your report on this issue.

Just want to give my findings on this trophy. Trophy achieved on 13 Jun 2021

6th Attempt: I managed to get into the ocean at the first sign of rain, however the trophy never appeared throughout the entire storm nor did it appear when weather was calm again. Restarted to last save

7th Attempt: Loaded the animals the same way as described above and immediately set out into the ocean before the storm. Trophy was achieved soon after leaving the island’s vicinity. Afterwards, the first drops of rain appeared followed by a storm. A user mentioned that this happened to him as well, going to another island. Though I wonder if it started to storm shortly after he ventured off.

If he did, my guess is that users can probably unlock the trophy by venturing into the ocean before even the first raindrops fall. Which to me, sounds like you need to be caught up in the storm while in the middle of the ocean rather than running out toward your raft at the first signs of weather change and hope the trophy works.

Hi Dragontech - Welcome to the forums!

Thank you so much for sharing what worked for you and how many tries it took. The point at which you sailed out and achieved the trophy is very interesting. I shall pass this onto the team and link to your comment in the Known Issues thread for this here - [Known Issue] "Two of Each" Trophy Unlocking Issues