I’m so glad they updated to fix the interaction issue (at least on the PS4 so far) except now I’m having other problems I’ve never had before. When underwater I’m completely phasing through the terrain like the coral and plants underneath. It used to do this a little before but now it’s like it’s not even there. Also I don’t know if anyone else noticed but the audio underwater is super weird now as well. Both of these things are just slightly annoying but don’t make it unplayable.
My biggest problem is that when I drop items from my inventory they sink into the ground! I didn’t notice at first and ended up losing like 3 stacks of planks! If I put the item in my hand first and then drop it then it won’t sink but it will if straight from my inventory. This doesn’t happen for coconuts or lashings or leaves but it has happened for my planks and sticks. This has been extremely infuriating.
These issues started the moment I opened the game after it updated. It was a previous save. I can work around it by putting the items in my hand first but it’s frustrating because I’m forgetful and losing resources!

The only setting I have changed is that I have animals on Passive.

I have tried reloading the save, shutting the game down and then turning it back on and restarting the PS4 but to no avail as none of this has worked

Please note that the update currently Rolling out on PlayStation is not the fix for the interaction bug. More info here: **A Note on the 1.09 Update for Playstation** 10/7

The team is also aware of the issue regarding items being lost through the ground and are investigating. Would it be possible to get the seed number of your save and the location of the island where you’re losing items regularly? This may help the team in reproducing and testing the issue on their end.

@Clare I saw that the update was not related to the bug 5 minutes after posting this. But I also wanted to make sure it was known that 1.09 was my latest update just so it could be the most detailed although I was having this issue before.
The issue of phasing through terrain came after the 1.09 update but the items disappearing has been since 1.08. I never had the phasing issue before 1.09.
My seed number is: #67588410
I’ve included a picture of my map from the cartography screen. The island that is highlighted red is my base island where the items disappeared. It also happened on the island directly SE of my base island. 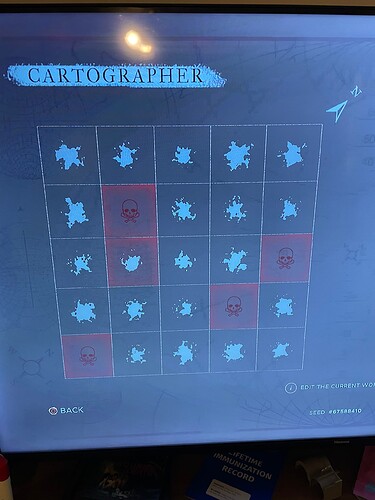 @clare also I should note that since the 1.08 update whenever I’m sailing up to my base island the game lags for a bit and then makes several quick clicking sounds before going back to normal. It’s been helpful in knowing I’m close to my base island (I have a habit of getting lost which is why I drew out my own map. Picture included) but it’s odd as it started after 1.08 and I haven’t seen anyone else have that issue. If you want I can take pictures or a video of what my base island looks like if that will help 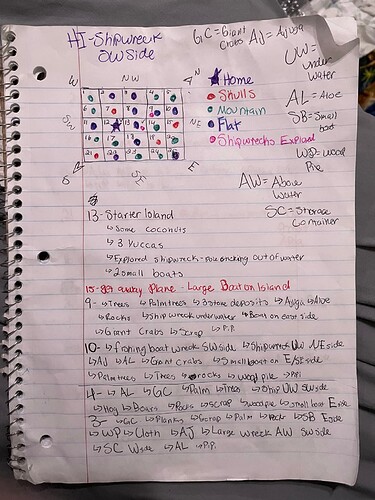 Hi Rharris - Thank you for all those extra details and for the images you shared (I’m personally quite the fan of hand drawn maps!)

I’ll update my report on items being lost for the team. I know the team believe the main cause behind the interactions issue is from Snakes falling through the terrain, but are looking into other creatures and objects too. This could be why the workaround worked for you initially (Snake spawn cycle was reset) but then it occured again when triggered by something else. (I updated my known issues report today with this info). Your information should help them when testing fixes for items being lost - Thank you again!

In the past, lag spikes were usually the result of too many loose items or rather big builds being kept on an island but I know there’s been some reports since the update of this getting worse (for older saves) or building up quicker for players. The footage of the approach to your island and the island itself may help the team in investigating this issue too.

Thank you again for sharing all this information and for your understanding while the team work to resolve these issues.

Hi @Clare ! Thank you so much for your reply! I will see if I can get it on video later today!