Platform Xbox series X multiplayer everything standed/normal mode it seems to be quite often that player two’ materials/items do not render into the game or into the crates should i say i have to close the game down and join back in a couple of times for the items to be there not sure if anyone else is having this issue ? Been going on a little while now the host however is absolutely fine

Thank you for reporting this. This does sound similar to item and desync issues that other players have reported.

Have you noticed if there’s any items in particular that are more likely to be invisible or is it fairly random?

When using crates, are they in container shelves? if so, do items successfully appear if Player 2 places items in crates that are loose on the ground?

Hi @Clare sorry for the delay for me personally everytime it happens the cloth and leather in invisible untill i close the game and reload some times there is other things to such as fruits and the hoe ect farming stuff but other than that it can be random things im game too stones clay ect but everytime the cloth and leather will always be gone. Some crates are in contairner shelves and some are just crates dropped on the floor. And its weird basically if i go to one crate which i know has the hoe init and i open it the item inside (the hoe) will turn sideways and stick out of the crate but womt actually show me whats in there if that makes sense i will try to gwt a pic the next time it happens to give you more of an understanding. And no it seems to be what ever item i place if we quit and go back to the game its all gone yes im player 2 aswell. The items will all be there for player 1 but not me (player 2)

Thank you for sharing those extra details. I’ll add them to my report for the team. Looking at cloth and leather first may help the team to narrow this down if they’re more likely to vanish.

Forum user Jbro shared this video in their report where they described similar issues to yours the other day… Is this how it appears for you too? Stranded Deep CO-OP Bug - YouTube
(Jbro’s original post: [PS5][2083][COOP]Items disappearing from chests)

Have you ever been able to interact with the items when they appear outside the chests or are they just there in a visual sense? 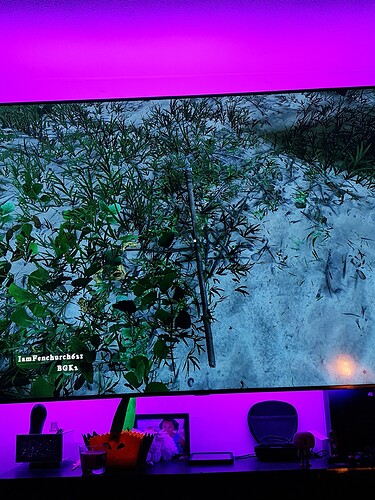 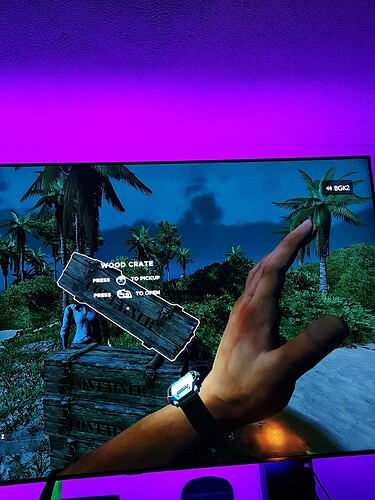 Thanks for those images Charlie1992, for the crates, is the one highlighted one is your character supposed to be holding it? Or is that another crate that’s turned invisible too?

Also (slightly off topic) can’t remember if I’ve said it before, but I love the back lighting on your screen 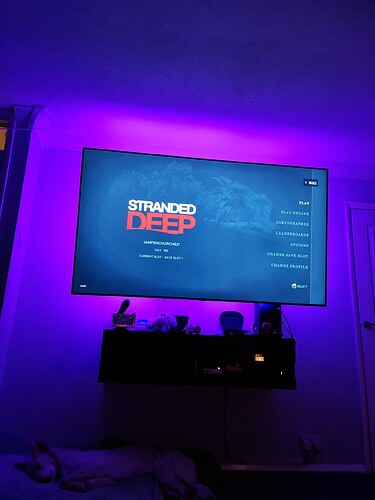 Thank you for confirming that Charlie1992. I might file this invisible slightly sideway crate as a linked but separate report. I remember players mentioninging items floating in MP for them before so I’ll make sure to note that too. There may be one issue causing a number of smaller issues, or they could be different ones bundled together due to desync.

If you notice any other items behaving oddly, please do not hesitate to mention them and I’ll let the team know.

That photo is very atmospheric and a beautiful colour too

And a bonus sleepy doggo! - thank you for sharing

Hi @Clare i have a couple more pictures from the other night i forgot to upload basically the Aloe is suppose to be in the crate and when i open that crate the items just pop out the top and it doesnt give me a prompt to pick them up either. 9 times out of 10 if we save quit and load back in the game comes back to how it should be if i come across any more ill upload pics aswell and im glad you liked the picture 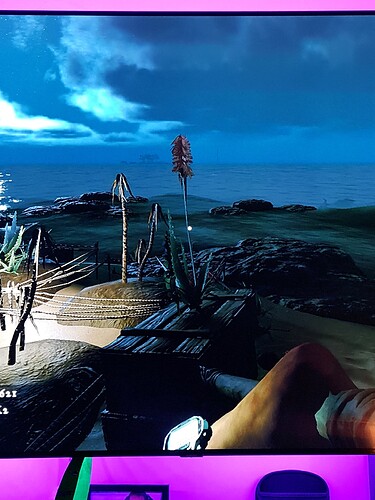 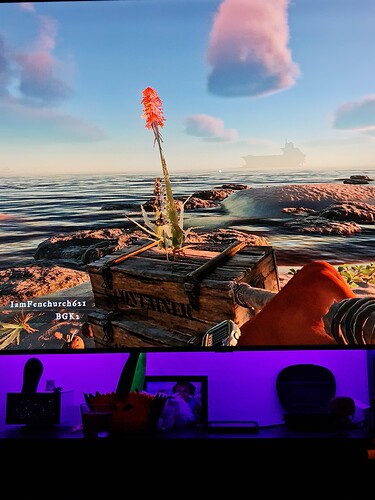 Thanks for unploading these too, I’ll add them to my report for reference for the team. Please do upload anything you feel could be helpful. So far it seems to affect all types of items anyway…

Though also no pressure if uploading is a hassle! Everything you’ve shared so far is great references!

such an awesome game though we love it

Uploading on weekends is no problem! I’ll respond as soon as I can but most weeks my responses will be mon-fri.

We were playing a multiplayer game last night and before we quit, both of us saved. This morning, my husband started the multiplayer game before I woke up and when I joined later in the morning, everything he had changed in the interim did not load into my game. I could see everything in our house, but not the house itself. I could see the items that were in our storage areas we built, but not the actual storage area walls.

The issue seems to be related to syncing of save files. We both saved the file again, while I was not seeing the items noted above. We then backed out to the main screen and restarted the multiplayer session. When it loaded, everything had loaded correctly.

Another note on an issue we’ve seen last night and this morning -
Previously, if my connection dropped out or I backed out of the game because of sync issues, he could invite me back into the game using the Xbox friends menu and I could jump straight back in. Today and last night, when we tried that method, I received error stating “Server not found. Check your internet connection.” The games have been set up the same way each time - private server, USA East location. The workaround for this has been for him to back out to the main menu and invite me from the session start screen.

We are both playing on Xbox Series X systems, in the same room and on the same internet connection.

Hi LeahW - Thanks for sharing this, while it alls seems to be tied to some sort of desyncing, what you’re describing is a very large desync between players.

I am glad however that reloading resynced everything for you. I’ll make a note of this level of difference happening in a save where the issues above are also occuring but I’ll also give it it’s own report too in case it’s something to do with how the save data was pulled as well.

Thank you also for letting me know about the connection error too and on what region you play on, I’ll make a note of this for the team also.

Thank you for adding it for research.

Any word on when Xbox might get the storage upgrades - piles, 5 spots in crates, craft crates, specifically?

I was gonna ask this too ! Would make such a big difference to the gameplay for console also adding custom maps would be brilliant aswell get so jealous watching these youtubers play on fantastically created maps its insane lol

No word yet @LeahW and @Charlie1992 - I know the team are working away on the game and reports made by players but details about if things from PC are being added to the game are unknown to me too up until a patch is announced. I’d like to see what you both mentioned added as well, but need to wait and see for now… Sorry I don’t have more info, I wish I did! However, I’ll keep a note of your comments as feedback too!

This kind of stuff is constant when we are playing. There are actually boxes under the ones that appear to be floating in mid-air, I just can’t see them on my screen. We also have a lot of issues with me not seeing items in boxes, me having phantom items in my pack, or me seeing him as standing in one spot, but doing all of the stuff he’s actually running around doing, like eating, drinking, building, etc. 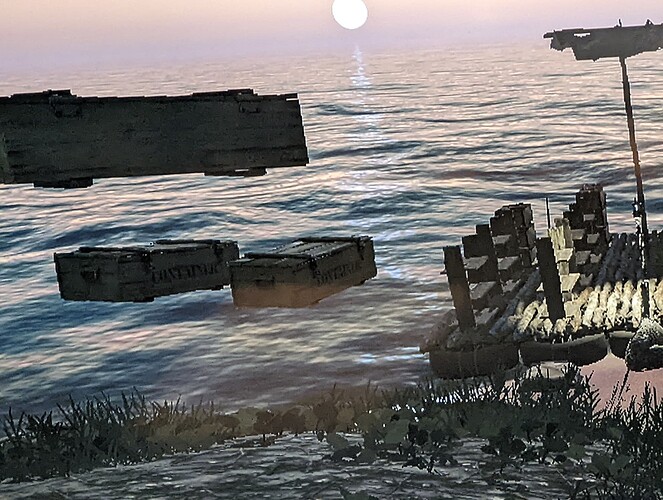 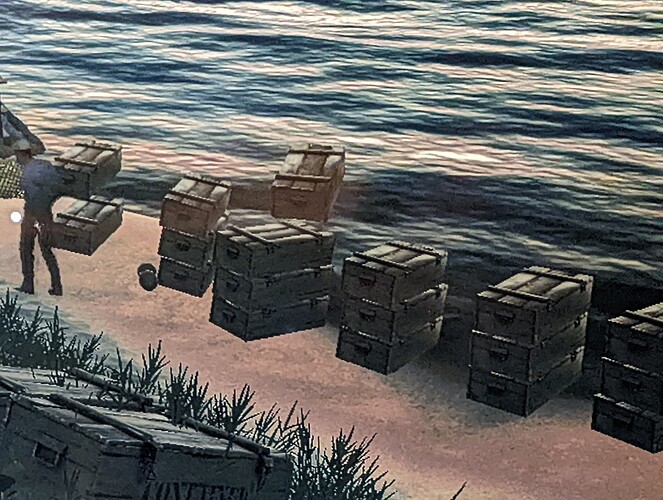 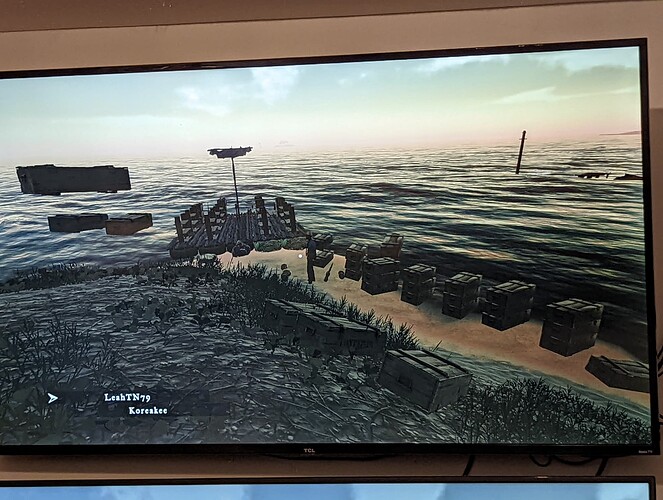 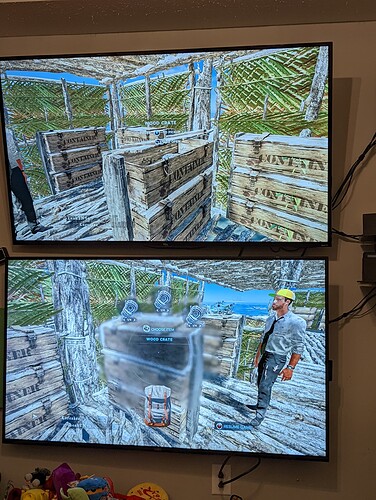 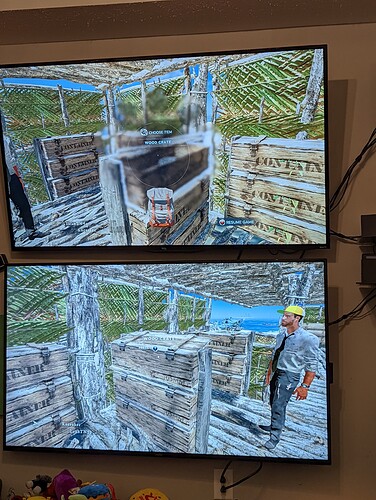 @Clare my husband noticed some changes had been made overnight, but I am not seeing anything on the forum detailing the patch or hotfix that was installed. Do you have any info on what was tweaked? I’ll not be able to play extensively with him until after work today. Stupid work interrupting my fun.

False alarm. There was nothing new, only stuff we had not seen before.