WIP Catlinite Cay or Clay Island. The Castle needs work and there will be more ships and some smaller houses

Just a quick tour around the castle. 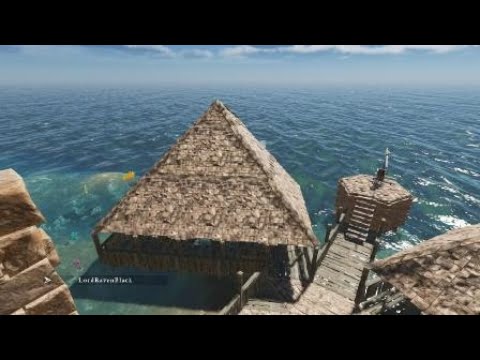 [Edit: okay, as I kept watching the video the reception area with the trophes is also sweeeet… I can’t decide what my favourite bit is anymore…]

I want to build up some parts of the castle. It needs some fine tuning.

I probably won’t be playing again until after the holidays. I want to build an all clay town around the castle. (mostly clay, I need some planks and stuff to break it up or it all kinda blends together), and another couple ships/docks and see if the game can handle it.

Is this in a multiplayer game? I remember you had mentioned somewhere in another post about working on a large scale multiplayer build, and I would certainly be interested in helping with such a project or at least joining after completion to gaze upon such a splendor first hand. I was not aware until someone mentioned it recently that the cartographer also affects the multiplayer side of a save slot as well, allowing for custom islands. Very cool indeed.

I just realized though, that we may not be able to play together, unless cross play is currently active between consoles or will be in the future. I am on Xbox Series X, and if memory serves me correctly you play on Playstation right?

Yes, this is the multiplayer build. It’s actually on the same island as the single player build, just on a different side

I am on PS4 and I don’t think there is cross platform.

I have opened it up a couple times just to see random people who pop in run around. lol

Perhaps one day they shall be able to implement cross play, at least between consoles, as I know there is too much difference from PC version for that to work. Hint hint, to the powers that be. Lol. Regardless, I always enjoy admiring your craftsmanship, good sir. Eventually I will try to test the limits of the game, once I have topped certain leaderboards I’m aiming for.

I would love crossplay! Everyone is invited!

Hello, congratulations on your magnificent castle! On the other hand, I noticed that you had the machete, the new harpoon and the new white and orange boxes. How did you do it? I am also on ps4 and I am not the machetes nor these color boxes and what it is about the harpoon I am still on the old model… Can you clarify this for me please ?

Good morning ! Forgive my French if there is milk! Once the game is over, you can restart in hard mode where you don’t get a raft, but where you start with two super crates with several special items. I don’t recommend actually using them, as they will wear out like anything else. Cool to have though!

Quick question, some of your build implies building down. Since the 2071 update (and it had been a while since I played before that) I haven’t been able to build down in any capacity, including /especially stairs. The staircase leading into the water so you could get on the dock is a great example. I remember being able to do that hit haven’t been able to since 2071. Is this something I should be able to do?

If there is milk. Lmao. Your French is quite impeccable in fact lol. I actually saw those special crates in your video also and wondered where they came from, as I have never seen them myself. All you have to do is put the starting crate option on? Think I noticed that before but never tried it out yet, or any varied settings actually. Other than difficulty and permadeath. Do the crates themselves wear out or you mean just the items within? Also how many inventory slots do they have? Looked like the same as the player inventory (full wheel) but I only saw at a glance. Also, sorry to bring this post further away from the beautiful structure that is the original topic. But I just had to comment after the milk input. Lol.

The yellow ones are actually labeled “STANDARD CRATE” (will there be a “BETTER” crate in the future?) They do not deplete over time, cannot be destroyed, and have a much bigger capacity than the wood crate, as pictured - but they do not fit into shelves and must be carried around in your inventory. Usually in the yellow crates you will find exclusive items - I don’t want to post any spoilers - but they are easily wasted and non-replaceable so I just keep them as household furnishings, if I ever get around to decorating that is! 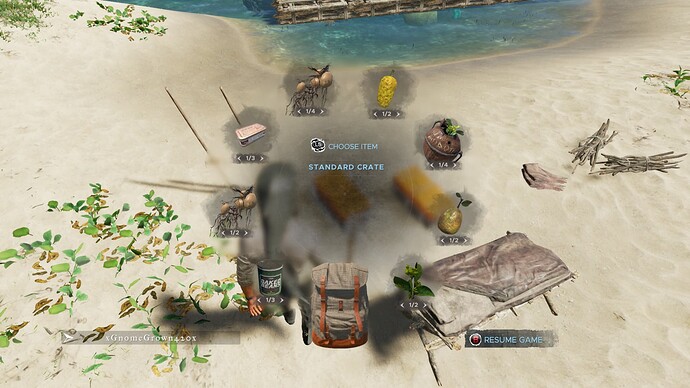