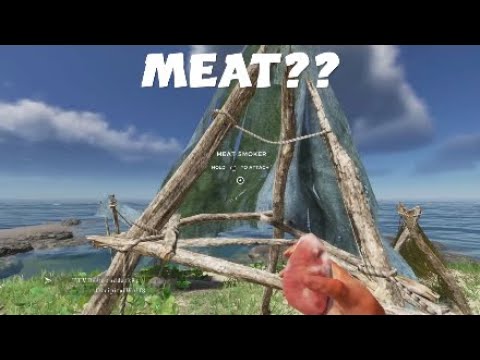 Soooo, me and my wife checked out the multiplayer… may have a few bugs lol. She couldn’t see or interact with my structures which I think wasn’t on purpose as we still had to share island resources and that would be hard to get 2 of your basics just to get started. At first I was like no big deal and I went to give her water and that is what the video is of. She couldn’t pick it up, it would still show on the ground for her though, and everytime I dropped it a mysterious peice of meat appeared, which seemed like a good thing at first lol.

Anyways, super happy to see this update drop. Always going to be a few wrinkles to smooth out lol. You guys work super hard for such a small team.

Thank you for sharing this video. Though this is in the videos section, I’m going to submit a report to the team on this issue.

Can you confirm for me if you were the host in this instance?
Did your wife join at the very begining of the save or had you created the new multiplayer save and she joined later?
Was your wife nearby when you created each of the structures / did she watch you build them?
Did you change any settings on the save before creating it?

Any extra info you can give about this issue would be great as I can pass it and the video onto the team so they can look into this.

I was the host and made a new world for us. She originally joined in with me at the start, but I forgot to warn her about the starting plane crash and she panicked while underwater and hit the ps button on her controller and it dropped her from the game lol. So after I got to land she re joined the game.
I know for at least one of the structures she was nearby but im going to say she wasn’t watching me build them as we didn’t notice she couldn’t see them until I was trying to tell her to get a drink of water out of the thing and she kept saying what thing lol. Most the time while I was building she was gathering resources around the island. She actually collected the small meat im messing with in the video.
As far as settings, I cycled them to see what the options were but I started the game with standard settings other than I did have the starting crate on.

We had been dropping and exchanging tools and resources and there didn’t seem to be any problems until I put the water in the the coconut. That seemed to be what then triggered the whole thing. Also, once it started, no matter what I was holding in my hand, on her screen i was holding small meat.

side note thank you for submitting a report, I wasnt sure which would be the better place for it. As always, your amazing and I appreciate it!

Thanks for those extra details and for your kind words and understanding while I work to figure out what’s happening so I can expand my report. I’ve been re-watching the video now that I’ve more time to go through it and I think this will end up as two reports

linked together. The water flask issue might be seperate or a trickle down effect of the original invisible structures issue.

At the end when you go to the smoker and all your meat is gone, I’m wondering if that’s the meat that’s dropping with the coconut flask each time you try to give it to your wife.

Though your wife couldn’t see the coconut flask when you dropped it, was she able to see the meat that dropped beside it?

Thanks again for sharing all these details and if you think of anything else beyond what i’ve asked, please don’t hesitate to let me know

You are correct, I thought it was making new meat, but my wife wound up being right that it was taking the meat from smoker. She could see and interact with the meat. Im not sure if I got it in the video, but the meat also would float when I dropped it instead of being affected by the gravity.
As for a little more detail on the coconut flask, when I dropped it and she looked at it, it would only pop up with my gamertag and not the item name or button prompt. When I would pick it back up she would still see it on the ground. Even when I just grabbed it and was shaking it around in front of her lol. All she saw was me holding meat. If I dropped it again, the one she was seeing would disappear and she would now see it wherever I dropped it but there would still be no ability to interact with it.

I noticed looking at the video again that I thought it had worked the first time I gave it to her but its because it still had the coconut water in it. It was adding the water from the still that caused it to quit being an item we could trade.

Oh yep - I saw the one of the meat floating in the video and I’ve made a note of it.

Thank you for the extra info on the coconut flask and how it appeared from her point of view. And also for confirming that she could interact with it when it was filled with coconut water - All great info to have for the team

So we had an idea to try to passing the flask through a crate and see if that would. However when we loaded up this time everything was there for her and it all seems to be working fine now. Got a couple hours in with no issues. So reloading might be a possible solution. As well as someone might be able to give the passing through a crate a shot.

I’m glad to hear everything is now working for your wife when you reloaded the game. I’ll note it and your crate idea down as a potential workaround in case others report similar issues.

I hope they don’t occur for you again but if your wife experiences any items turning invisible, or you experience ones similar to the coconut flask and meat issue, please let me know.

So we are able to recreate it and we’ve figured out what is causing it for us at least. She has to start the game with me, not the world, but the game. If something happens where she loses connection and then uses the invite to join back into the game, there will start being problems between our stuff we make. Once we both exit the game completely and reboot it and then start the game up together the problems will be fixed.

We were also able to recreate it by me sending her the invite to join and then her waiting to actually hit join until I was in the game.

Thank you for following up with those details Desmonddark85 - I’ll add them to my report for the team. This should really help the them when they try to replicate it on our end to test it.