We occurred lag and mostly disconnect when sailing together, mostly right before we egt closer to an Isle. Might be the time it’s start to load information on that Isle. Always been the Player 2 who lost connection. Both occurred lag before.

When re-entering there was items gone for Player 2. Once there was item he surely didn’t had at last save, but he had saves before, result been like a shuffled inventory from save files. Idk.

Having issues Player 2 (mostly) dropping objects fall thought the map and gone. Once experienced that they just seem gone for Player 2 but host could see them.

We had objects dropped by Player 2, that the host could not see, and the Player 2 could not interact with, so they become useless at this point (item boxes, palm Bush).

Camo build by host not visible for Player 2.save still works. Sleeping like just the environment light up. Then we checke watch. Host got another day 8, Player 2 sticked at day 7 after Sleeping in invisible tent. Happend two ig days in a row. After Re join of Player 2 clock been synced.

We had issues those wooden item boxes had diffent items wheater host or Player 2 been opening. Think there was some sync. Problem when Player 2 re-arranged and sorted things. Maybe host been too far away on same Island to track that?

We had meat at campfire appear cocked for the host, but not for Player 2. When eaten by host it’s fine, but for Player 2 the host is puking like it was not cocked.

And let me upload a Screenshot. When host leaving with raft some storage items been in place for Player 2. Another async of items and boxes content I think.

All problem occurred in a 4h Session, 5 isles visited, 9 ig days spend, friendly animals, and about 5 restarts from Player 2. 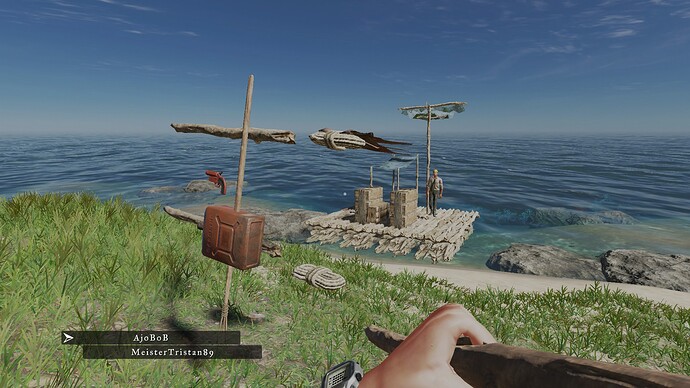 try a different NAT Open I think is one. You will come across other or same bugs that the Beamteam are aware of.

Hi AjoBoB, welcome to the forums,

Thank you for taking the time to share the details of the issues you have experienced as well as providing that screenshot of the item desyncs.

I will pass these details onto the team for them to look into. I believe there are a number of items mentioned that should hopefully be addressed by the update that is rolling out today (full details can be found here: Update 2078 Patch Notes) but I know the team are continuing to work on desync issues and have recommended that as soon as players notice a desync that they quit and rejoin to resync the save as it may help prevent some other issues from occuring.

If you notice any changes in gameplay, or any issues that continue to persist after the update please let me know and I will update my reports for the team.

Thanks. We will try the game again with those Updates. Will report if there is something else. Thanks for working on that gem.

A post was split to a new topic: [2078] Multiplayer disconnecting

We also had game crashes when travelling on raft at multiplayer.

Thanks for including that information AjoBoB. Have you had any luck with the latest update? No worries if you haven’t had a chance to try it yet. I’ll keep an eye out for any further updates from you

Yes, those crashing have been happing with the latest update from 22-11-2021.
One crash while we have been on raft at open sea.
the other update when i (guest) wanted to grab a wooden box under water.
Both PS4, both NAT Type 2. We stopped playing after that 2nd crash and decide to wait for a more stable game.

Thank you for letting me know AjoBoB, I’m sorry to hear that the crashes are still persisting for you and understand you wanting to wait before playing again. If at all possible, I think the team would benefit from having a look at a copy of your multiplayer save(s).

They cannot fix and return saves, but they would be used to investigate these issues further and continue to work on releasing fixes for players as a whole.

If you’re happy to do this, and if you still have your save, please see the instructions here: [Save File Request]

A post was merged into an existing topic: [Known Issue][PS4/XB1] Stuck in “Cleaning Up” phase on load