How do you navigate?

Thank you, for sharing your lost compass stories, I don’t feel so alone in my tossing it overboard! Thankfully there are multiple ways to navigate… including a backup compasses… which I did try to toss overboard not 5 mins later but it landed on the raft instead of in the water. I now stick to navigate before and when I land for safety reasons lol.

@shokujin, I think I may have found a neat trick. I started a new game and want to beat it without using a compass, so I figured no gyrocopter this time… boo

! But, when I spawned, there was a shipwreck on my first island. I don’t know the specific name of this type of wreck, but it is the one with the tall mast that sticks way out. The one where you can swim into the holds from the stern. On the top deck, next to the ships wheel is a compass. I took a photo, and wanted to share it. I will post later. I have to download it from PS4. I am hoping it is accurate. I use the sun (see other posts) so it appears to be right. Hopefully that does not constitute using the compass! 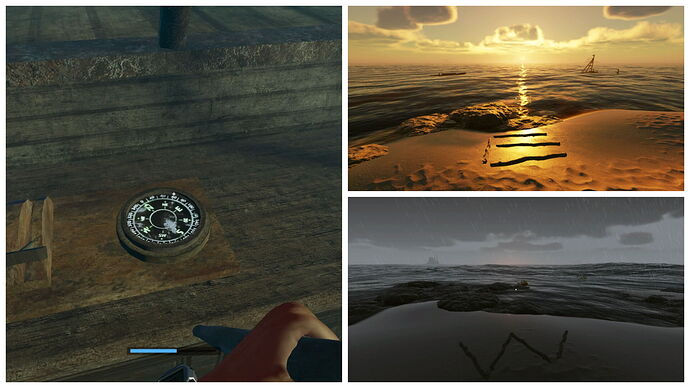 The update actually fixed this, now i can have a full inventory and use something from my belt, when i switch to the belted item it wont drop on the ground

@Mtragincajun79… so if you have a full tool belt and your pack is full, you still have the ability to carry one thing in your hand (whatever you want)… are you saying if you then select something from your toolbelt, you will no longer drop the item? That would be dope. I haven’t tried, merely because I learned not to do that the hard way… kind of like touching a hot stove.

This is gold. The raft controls so smooth now. It wasn’t doing this a few weeks ago for me. It used to feel like a tank on top of wood trying to float on water. Good job there. I started playing the game yesterday and found out a friend of my gf plays too. She told me her friend was saying that she feels like she is actually stranded. Pretty cool.

Yes, lol I was very surprised when I didn’t drop the item in my hand either

I think the PS4 version always had separate toolbelts from the main inventory. I can’t quite remember dropping an item except when it came directly from inventory and I’d filled the whole bag while using it prior to swapping out for a tool, hence nowhere to stow the item when switching to a toolbelt item.

And I just came up with a suggestion from this realization that I could post here. Going to do that before I forget what it is.

Typically I set up my base island next to the ship and then use that and the sun to navigate. Then I will sail out to different islands on one heading. Say I start sailing east, reach the edge of the map/no more islands, then turn around and head west back to base. I just use the sun, not a compass.