If you start a boss fight (for example with “Meg” or “Luska”) and during the fight you get to far away from the starting point, then the boss resets. This can easily happen if during the fight your raft is drifting too far away, or you get dragged to far away by the boss itself. When the boss resets, it will disappear, but if there was an orange direction marker this marker stays. The boss reappears at its normal position. If you start the fight again, you might even have 2 orange markers on screen now.

Start a boss fight with Meg or with Lusca (Currently I can’t tell if the 3rd boss is also affected). Unless the boss is very near, you will have an orange marker on the screen which points to the direction of the boss. Then move away from the boss. The boss resets, which means it disappears, the fight stops and the boss reappears at its normal position. The orange marker now points into the nowhere, at the position where the boss disappeared. If you start the fight again, you will get a second orange marker.

Extras
If you save and reload your game, the orange marker is gone.

This image shows 2 orange markers (one at top and one at the left side), both from boss Meg. The left one points to the position where the boss did reset previously. 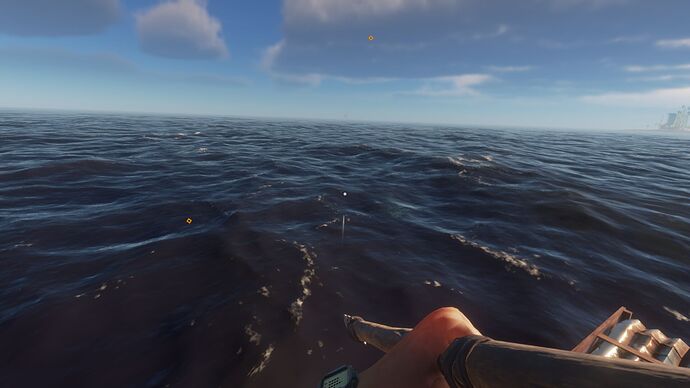 Thanks me2.
Another well detailed bug report.

Translation
Google Translate, added by Clare
Is your problem solved? If you save the game and exit, it is fixed.